This post might make quite a few of us think about Juliet from Shakespeare’s Romeo & Juliet lamenting about their family names keeping the lovers apart. Well, what’s in a name? In this post I will talk about fountain pen names, the naming of fountain pens and showcase some cool fountain pens with either a unique fabrication method or an interesting name and sometimes both! As a bit if an aside, the building I currently live in has “Waterman” in its name. Of course when I first moved here it did occur to me to live in a location with the same name as my favorite brand of fountain pen and thought it rather serendipitous. After viewing the place, it affirmed my decision. Maybe it played more of a part then I care to admit. 🙂

As far as the naming of fountain pen models and finishes go, the odd things is I find that a lot of the earlier finishes or models have some story or inspiration behind the name. More recent models, however, don’t have much information with regard to this and it made me wondering why. Perhaps pen manufacturers want us to generate our own narrative, only giving us the barest background with usually only a description of the pen rather than what inspired its name. Don’t get me wrong though; those descriptions are usually very poetic and elegant but I thought that if it was accompanied by some story behind its’ creation it would definitely be more compelling.

Now these fountain pens are really things of beauty. I suppose the write-up which Cross has done is actually pretty remarkable in this case. Or at least it speaks to me. I like the line about possibility and imagination. Go click on the link and have a better look at the pen and the description. I chose the link to point to the “Everest” finish over the others since I thought that a black nib is a bit more unusual and that from there, you can also look at the other finishes without the ballpoints and rollerball pens getting in the way. 🙂 Not that there’s anything wrong with them. Actually, having this finish available in rollerball and ballpoint is an advantage since that is not always the case.

In fact, the image above of the Wanderlust finish showcases only the ballpoint (Antelope Canyon finish) and rollerball (Everest finish) versions from Cross. This is but a taster to the fountain pens in this finish.

PVD coat
The black nib from the Wanderlust Everest is interesting for the fact that the chrome finish is not actually plated but rather coated on using a technique called physical vapor deposition or PVD for short. This ensures that it is much more durable than an electrolysis coating via which is usually what we might expect. The reason for that is because a solid material is vaporized into microscopic particles and then deposited on to a surface – in this case the stainless steel nib and platinum trim. So no need to worry about the black material flaking off or tarnishing as this process ensures the coat is really very resilient.

The fantastic swirls of color are what distinguish the different finishes apart. Their names are all somewhat linked to the hues on the lacquer pen bodies and these fluid geometries are outlined and spectacularly complemented by silver or gold-plated appointments. Their description appears to imply that these swirls of color are done in layers which would make it that much more unique and each individual piece distinct. If that were the case, it just increases the appeal of this model for me.

Starting from the topmost pen in the image above is the Wanderlust Antelope Canyon. Now this brings to mind arid desert hues and swirling sand. My very first thought was not of antelopes but rather of slot canyons in Nevada. These sweeps of color really do look like the canyons carved by wind and time. The metallic gold lines accentuate a diffuse lighting reflecting and softly illuminating the canyon walls.

My first thought of and indeed every time I hear the country Malta is of a Murakami novel. I suppose those who experience the same as well understand what I am talking about. However, in the case of this pen, the varying aquamarine hues pay homage to Malta’s maritime culture and in fact, the word “aquamarine” stems from the Latin aqua marinus for “water of the sea”. The differing shades of color lends the illusion of depth and gazing down at the Port of Valletta from above.

I have been to Sarawak which is located on the East Malaysian island of Borneo before and was delighted upon seeing that shade of green on the white lacquer. It reminded me of those majestic peaks and frothy foam flecked seas. I visited in December which can be a bit risky for sightseeing as it is the monsoon season and you might find yourself trapped in your lodgings while torrential rain lashes the island. Though if you do decide to risk this, as I did then, I felt I was rewarded by the increased moisture producing low hanging clouds which wended their way through mountain valleys and obscured peaks. 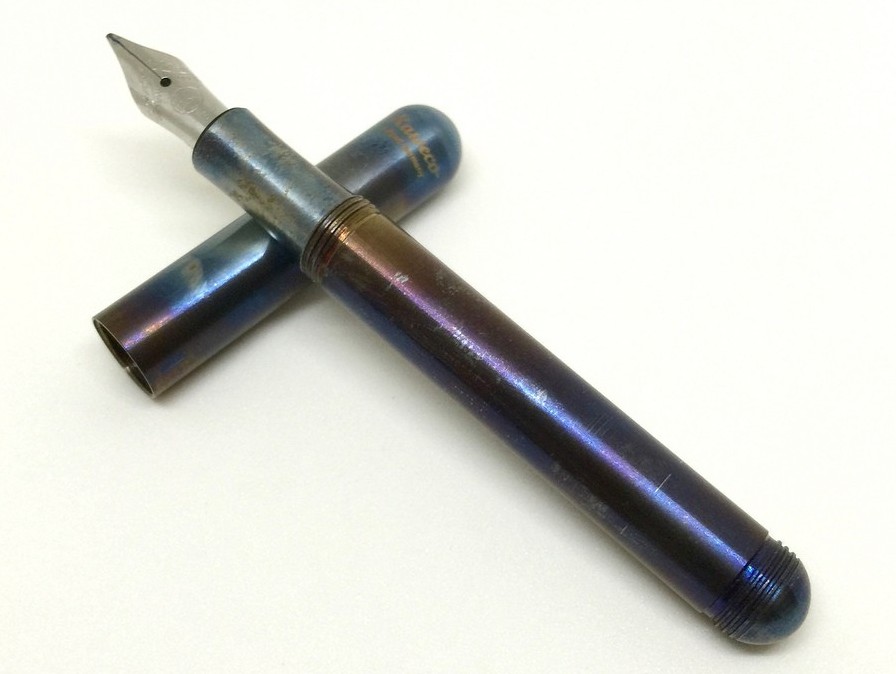 Now this pen is really something else. When I first saw this Kaweco fountain pen I was honestly quite surprised and it turned what I knew about the brand on its head. To provide a bit more insight into the name, Lilliput or Lilliputian is usually used to refer to something of somewhat diminutive stature or being very trivial which really belies the artistry which goes into producing a fountain pen such as this.

The word “Lilliput” is derived from the book Gulliver’s Travels by Jonathan Swift and is about a fictional island where its inhabitants are 15cm in height. Furthermore, Lilliputian society was intended as a satirical parody of Great Britain where the important matters were ignored and trivial issues were blown out of proportion. But this isn’t meant to be a political critique and it was named thus probably due to it being the smallest fountain pen int he world to take standard ink cartridges. However, if you screw on the cap (posted) then it becomes quite comfortable to write with.

This fountain pen is actually a bit lighter than most of the lacquer or plastic pens out there despite it being made of steel. However, it is still well-balanced and comfortable to write with. And now for the best bit. “Bluefire” is derived from the blowtorched steel body of the pen which gives it a phantasmagorical coat of gold, purple and blue. Even more unique is that since it is done manually, no two pieces are identical. Since the body and cap of the pen are crafted separately as opposed to being manufactured as a single piece, both parts of the fountain pen are carefully selected to match insofar as is possible.

I think it was partly the name Bluefire and its creation which made me think of a will-o’-the-wisp and lit my imagination aflame. Perhaps I am somewhat of a closet pyromaniac but the idea of personally torching a fountain pen for myself is massively appealing. Let me know what you think and if you have any other interesting fountain pens you’d like me to talk about!

No doubt there are many fountain pens out there with an interesting name or go through a unique fabrication process and these are just two of them. As I mentioned earlier, it would be nice to talk to the people in charge of naming these pens but barring that, we can only speculate and dream. 🙂

Jaron is a self-confessed idealist who is passionate about fountain pens, badminton, jogging, nature and food. When not blogging, he can be found watching videos on YouTube or reading.